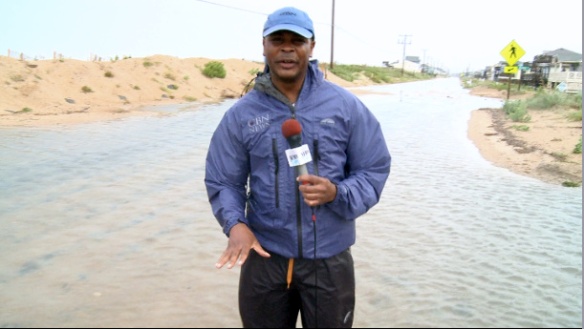 Efrem Graham does a news stand up in the Outer Banks the morning after Hurricane Earl rolls through.

I’ve never been in a hurricane before. The closest I’ve been to experiencing one was last year this time while covering a tropical storm that formed over Virginia Beach. We dealt with flooded homes, stranded cars, downed power lines, that sort of thing. I remember in amazement the water level at my door step, watching it slosh up and over the curb. I remember barely getting to work in my gray Sonata, worried that the flooded streets would hurt my engine. Going into Hurricane Earl I didn’t know what to expect. That was a tropical storm, this was a hurricane.

END_OF_DOCUMENT_TOKEN_TO_BE_REPLACED

I was sent to Manhattan to cover a polarizing story.

An Islamic community center (basically a mosque) is being built two blocks from Manhattan’s Ground Zero, the site where Islamic extremists brought down American skyscrapers in 2001. As for my opinion, I’m torn. Lucky for me, as a visual journalist, I get to be neutral and let people decide for themselves. However, I do have a few observations from our interviews while visiting New York…

END_OF_DOCUMENT_TOKEN_TO_BE_REPLACED

I hope you’ve taken some time to look at the photos coming out of Haiti. Look into the eyes of angry and lost people. Not to be dramatic, but I think its important to acknowledge the hurting people of Haiti, mainly those in Port-au-Prince. This kind of hurt demands an international response of compassion, patience, and support. END_OF_DOCUMENT_TOKEN_TO_BE_REPLACED

So, happy New Year. 2010. Exciting. I’ve been hearing and seeing a lot of top ten lists on the radio and TV, so I’ve decided to make my own. It’s a list of the top eight stories (had to be a little different) I’ve had the opportunity to cover over the last year.

I have to be sensitive here, because some of the stories are tragic. They were very hard to shoot. This list isn’t about most fun, or which story was happiest. The list is more about my connection with the event: what I was able to learn, what I was proud and honored to be a part of. So, without further ado… END_OF_DOCUMENT_TOKEN_TO_BE_REPLACED 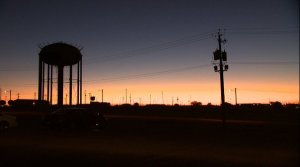 The sunset at Fort Hood Army Post, right before the candlelight vigil.

Thursday afternoon Maj. Nidal Malik Hasan, an Army psychiatrist, stormed into the Soldier Readiness Center, two handguns drawn, and started firing at whoever he could find. Some argue he had targets, others argue it was random. Although the details are still murky, it is clear that Hasan did something unthinkable, irrational, and arguably unforgivable. Some soldiers have called it the ultimate betrayal. Major Hasan turned on his own soldiers, those he had dedicated his life to protect.

Webster defines aftermath as “the consequences of an event.” By this definition the aftermath has yet to be determined–it can be hypothesized at best. What is for sure though, is that 13 brave men and women died at the hands of an Army Major, someone they looked up to for leadership and support. Usually when I write articles in my blog I start out with a clear conclusion, some final thought or idea or opinion to work towards. Today, I don’t have one; not in some dramatic speechless fashion, but in a tired, confused way. How can someone like Major Hasan (last name assumptions aside) do something like this? Instead of even attempting to answer this question, and in avoidance of simply restating facts that were blared by mainstream media for days straight, I’ll simply retell some of the things I saw. I’ll describe some of the people I met, and some of the stories they told me. I’ll leave understanding the intricacies of human atrocity to you… END_OF_DOCUMENT_TOKEN_TO_BE_REPLACED

A state drawing battle lines for the definition of marriage.

My latest bit of travel was fairly interesting, to say the least. It started out in Maine covering Gay Marriage, and ended in Fort Hood, TX, covering tragedy. I’m going to write two separate posts, one on my trip to Maine, and one on the tragedy at Fort Hood.

Originally a quick two day trip, our mission was to head to Portland, ME and cover the citizen’s vote to uphold legislation that legalizes gay marriage. The state legalized gay marriage using state passed legislation, but the public demanded a vote instead. This vote would either uphold the current law (keeping gay marriage legal), or turn it down (making it illegal). Millions of dollars went into both campaigns: commercials, radio spots, billboards, signs and stickers. In the end the vote was won by citizens who wanted to do away with the current law (which wasn’t even in effect yet), successfully ending the possibility of gay marriage in Maine.

I found myself in a ballroom at the Easton Hotel, embedded with the camp of people who wanted the legislation to stand, the people that wanted to keep gay marriage legal. Wet bars were on both sides of the room, projectors flashed up the latest vote count on big screens at the front of the ballroom, and people excitedly watched as different counties in Maine started to report their numbers. Lesbian and gay couples held hands, talked with other couples, and quietly watched the screens with hope. As the night dragged on, the pro-gay marriage camp watched their numbers slowly fall as the votes to make it illegal started gaining ground. By 1:00AM, they had officially declared a loss…

END_OF_DOCUMENT_TOKEN_TO_BE_REPLACED

Our family rode bikes down Main St. in Lindsborg, KS to celebrate our heritage.

It started with a photograph of a little boy, and ended in a little town in Sweden, nearly 2,000 miles away, some hundred years later.

My grandfather’s dad’s parents had migrated over to the United States back in the late 1800’s. For some reason or another, all contact between the newly Swedish-American family and the homeland was lost. As soon as my Great-Grandfather’s parent’s hit US soil they had trouble keeping up with family. Losing touch with distant Swedish relatives, sadly, caused a massive gap in family history. We knew we were from Sweden, but to put a finger on much more than that would be a stretch. There was one thing though, that would prove key to unlocking our family past… END_OF_DOCUMENT_TOKEN_TO_BE_REPLACED